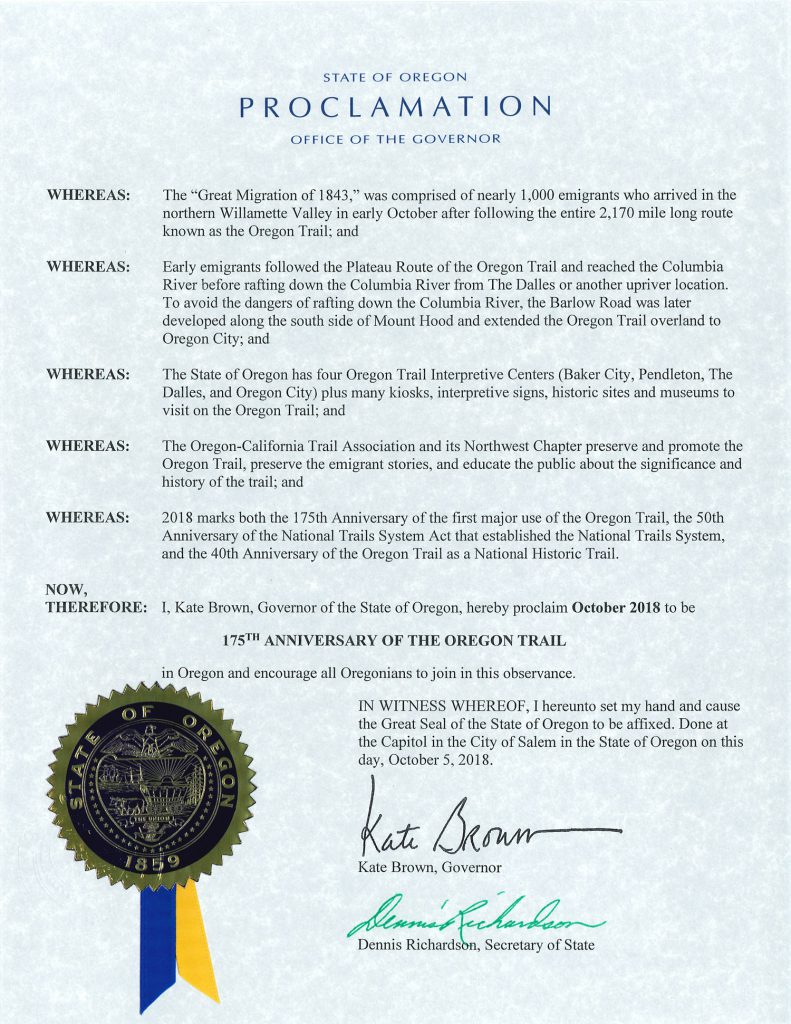 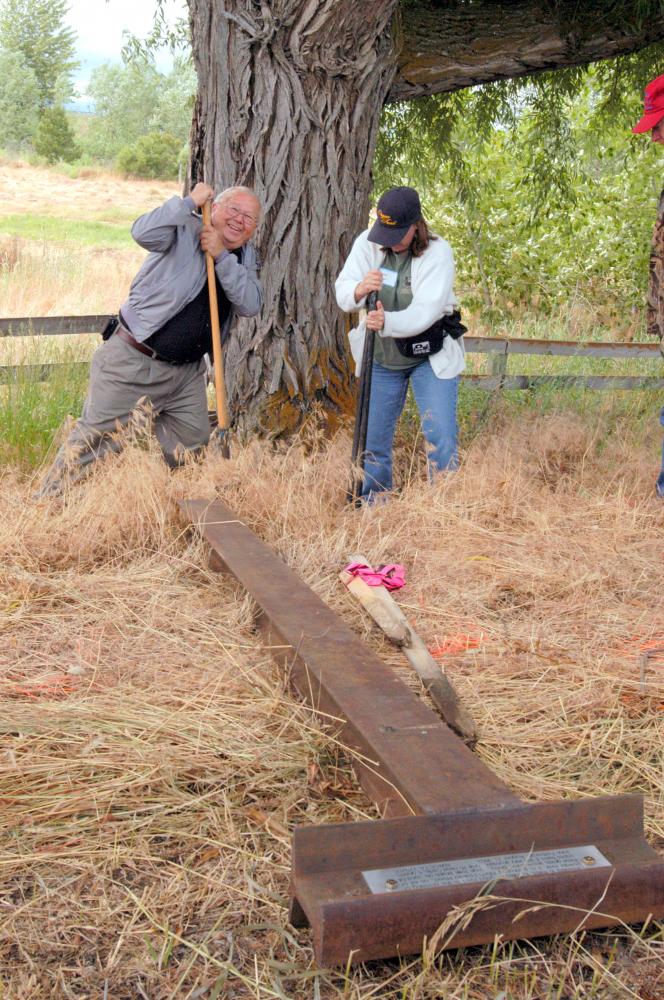 1/10 Setting a Trail Marker on the Oregon Trail 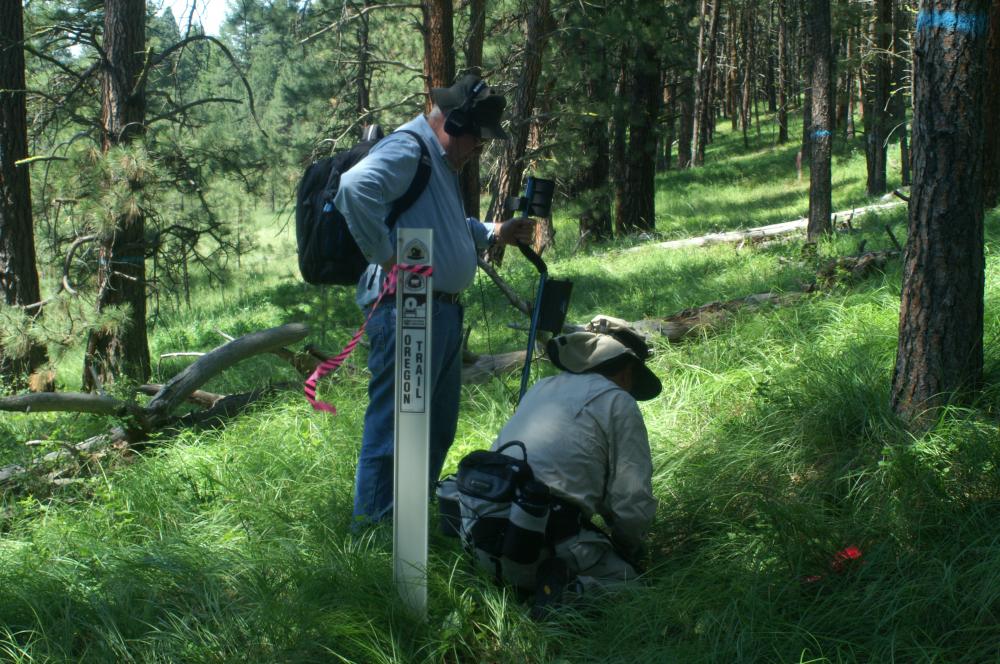 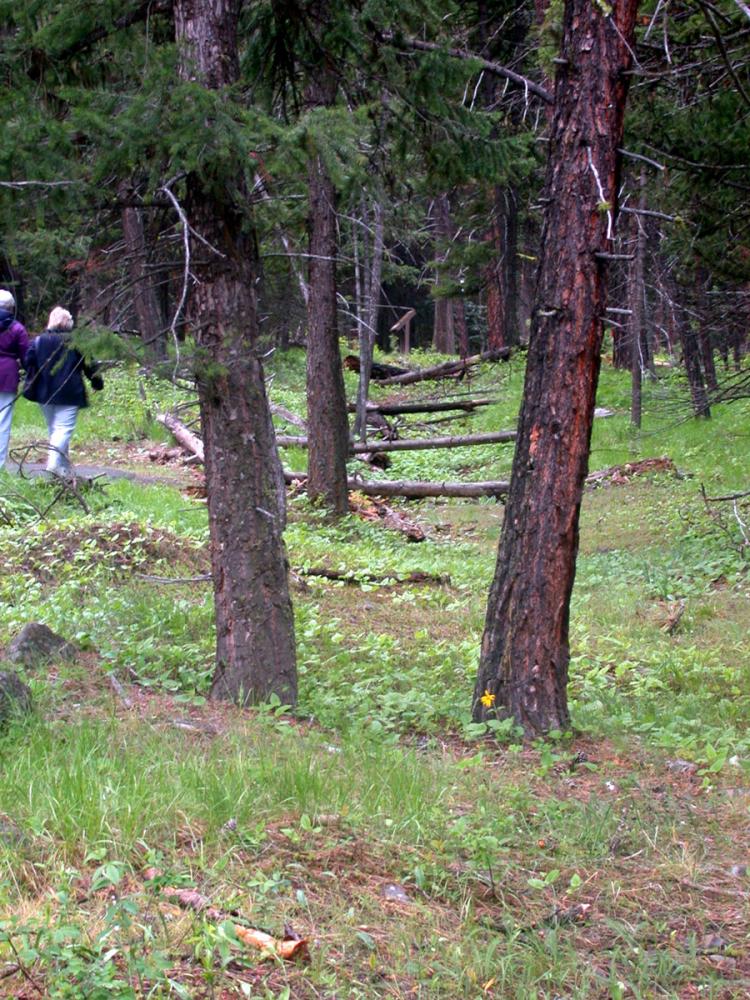 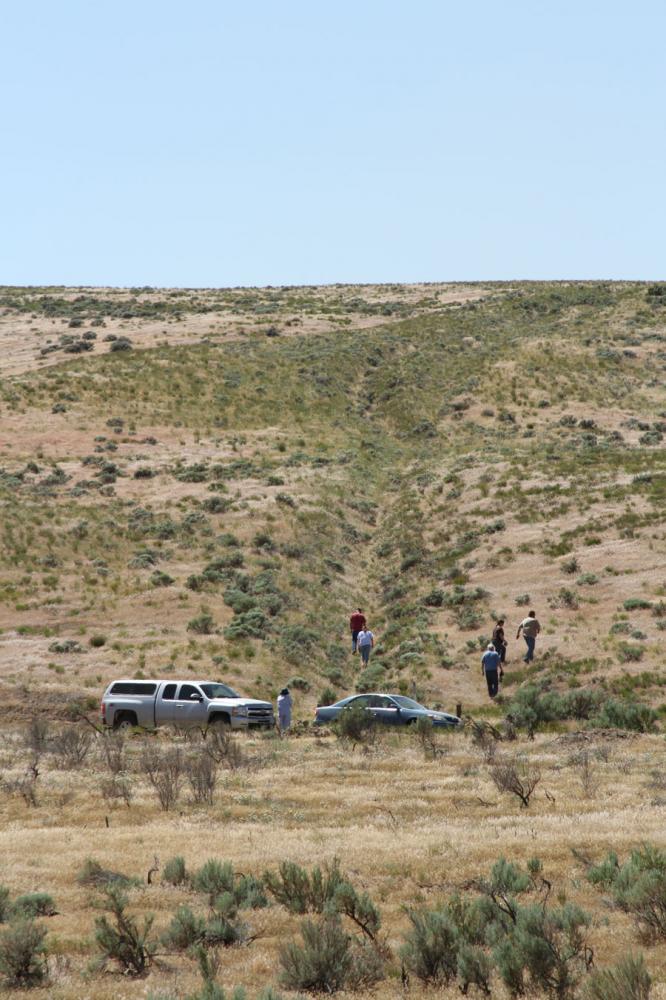 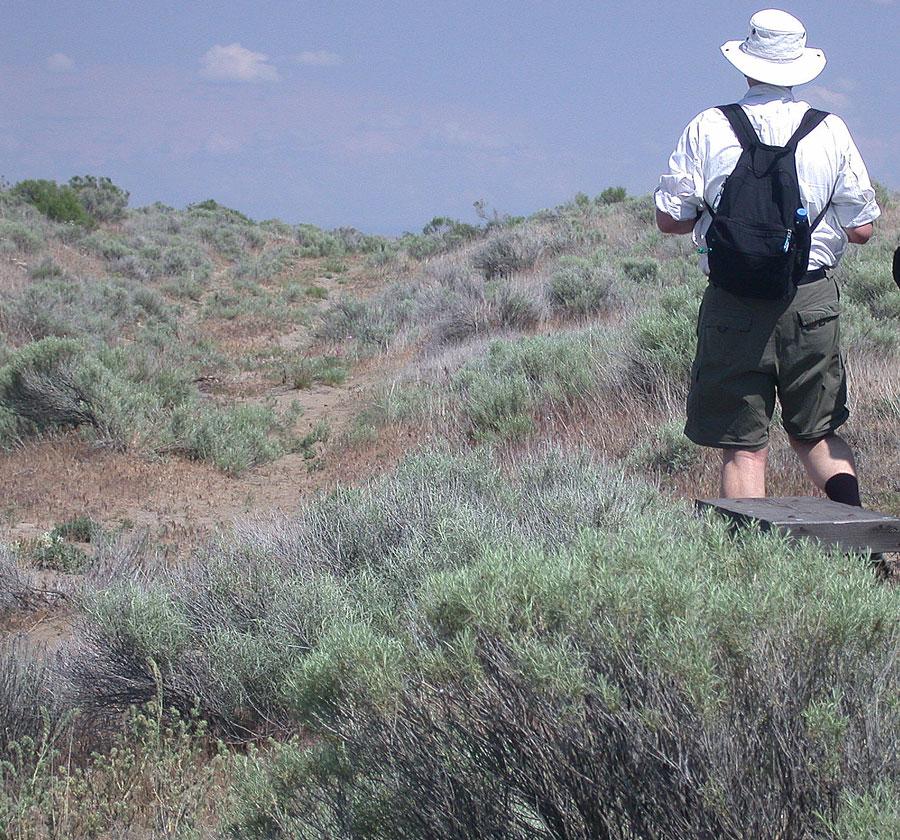 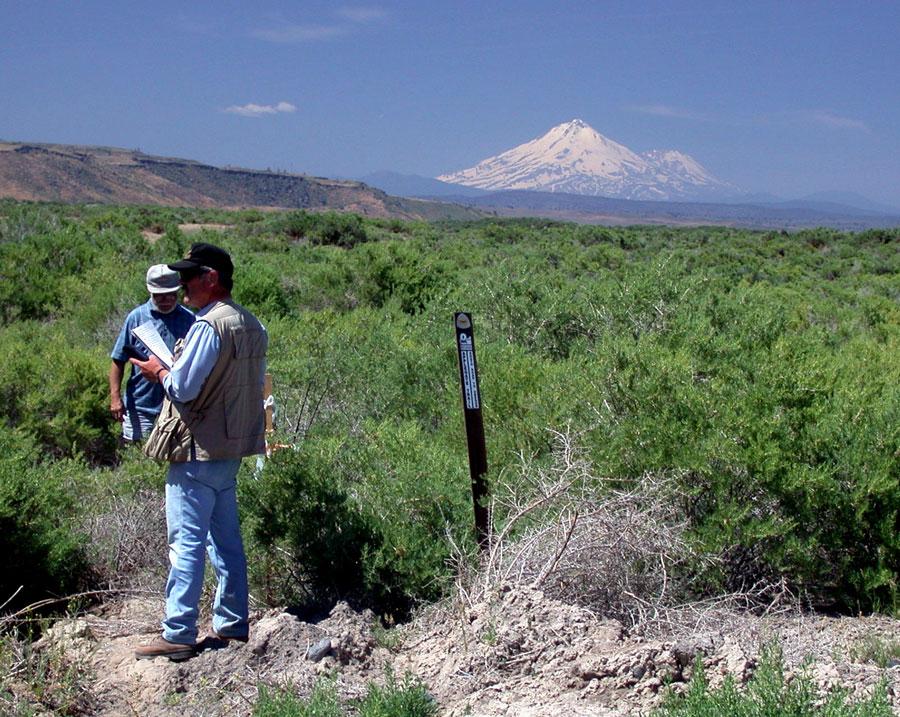 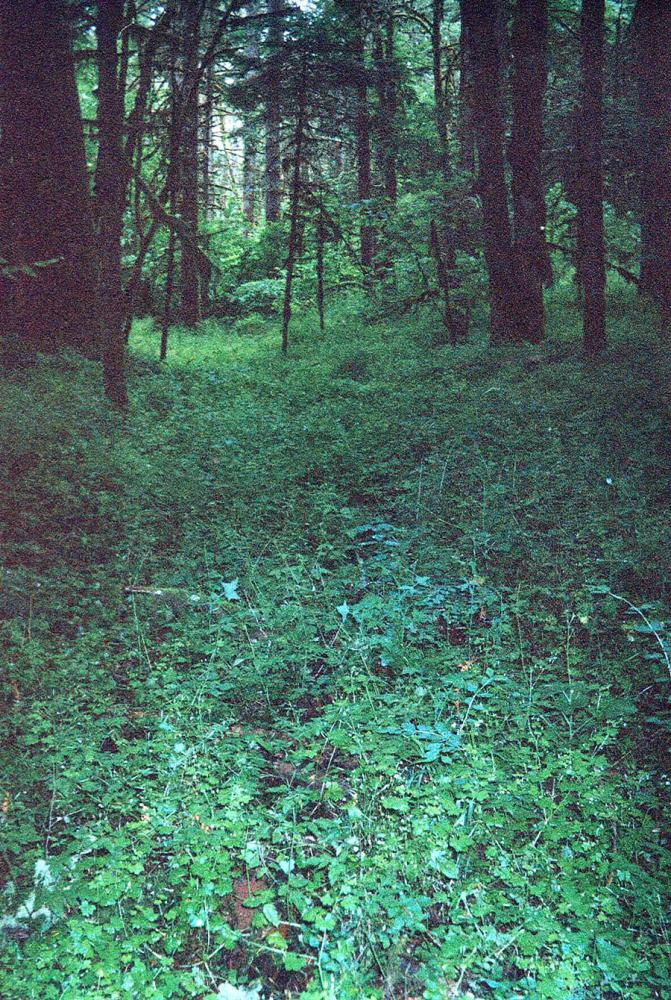 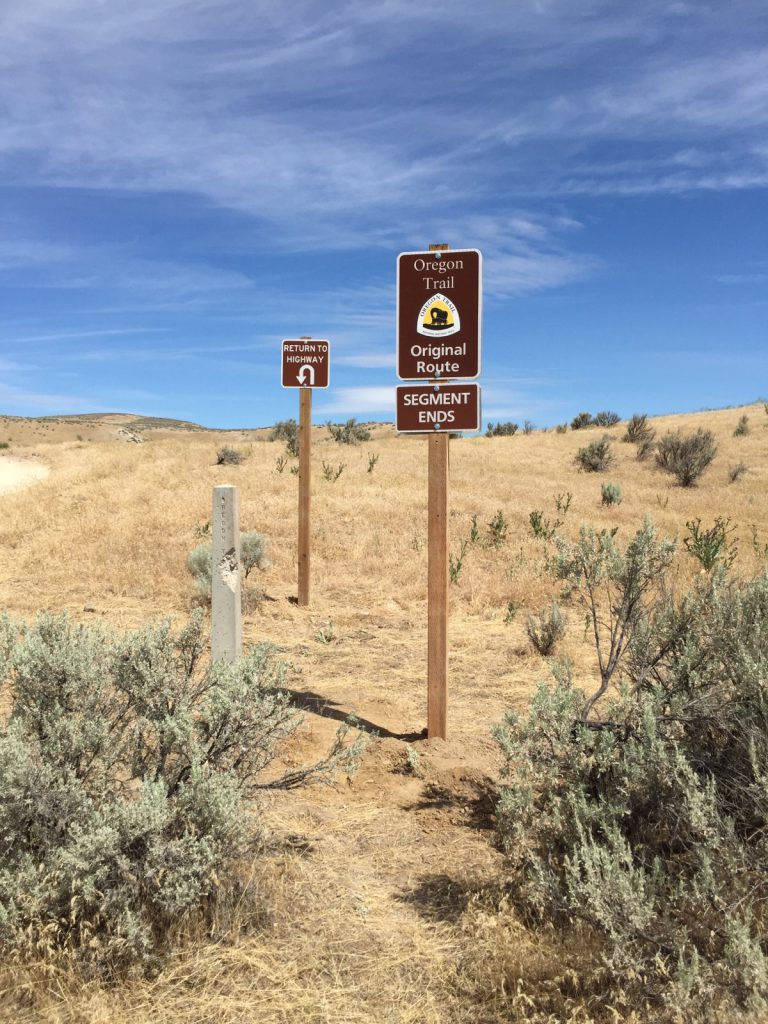 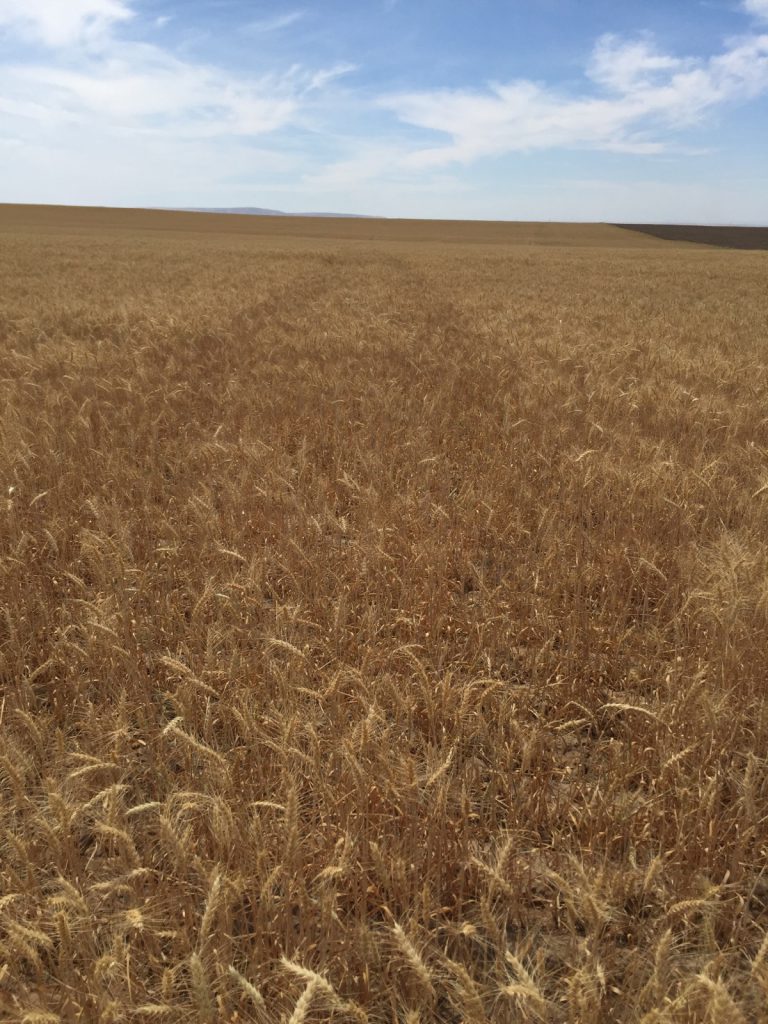 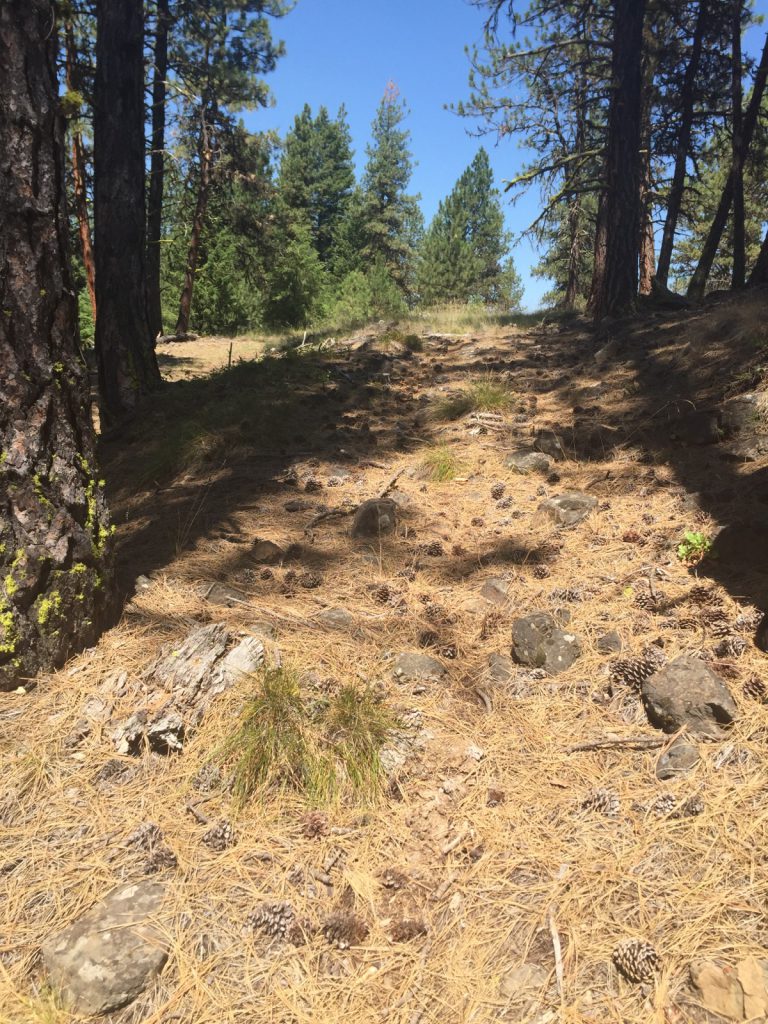 Our interest is in study, research, protection, preservation, and enjoyment of the historic trails in Oregon and Washington. We have the privilege of living in the territory where overland emigrants settled and started new lives.

Many of our members are descendants or know descendants of trail pioneers although many don’t have these connections. We strive to preserve our heritage. Some of the more notable NW sites along the trails are the Columbia River, Fort Vancouver, ruts near Echo, Barlow Road, Blue Mountains, Whitman Mission, the End of the Oregon Trail Interpretive Center in Oregon City, and the Oregon Trail Interpretive Center near Baker City. There is more to see on the Applegate Trail (the Southern Route to Oregon). Our chapter is deeply involved with researching, mapping, and marking the historic trails. We have semi-annual tours which are open to the public of sections of the trails. Please join us – it’s fun.

The mission of the Northwest chapter of OCTA is to support and initiate local efforts using private and governmental partners and to join with adjacent chapters in support of the national association efforts in identifying, preserving, protecting and educating the public about the Oregon Trail and California Overland Trail legacy.

Additional Outings, to be determined:

Due to the Covid19 Pandemic, there are no outings planned at this time.

Possible “outings” at the Umatilla Chemical Weapons Depot, Boardman Bombing Range/Nature Conservancy might be scheduled at a later date.

The Naches Trail crosses the Cascade Range through Naches Pass, roughly from today’s Bonney Lake in the west to Yakima in the east. Later the name was applied to the route from Walla Walla to Steilacoom, as an extension of the Oregon Trail.

Below is a list of OCTA Northwest members holding elected and appointed positions with the chapter. Additional information is available in the link below.

Issues Related to the Trails in the Northwest

This section will address current issues of importance to the Northwest Chapter. Of immediate concern is the proposed transmission line from Boardman to Hemingway. This line will severely impact the Oregon Trail

Northwest Trails is the newsletter for the Northwest Chapter. It is published quarterly (January, April, July, October) in electronic and print versions.

This section provides by-laws, policies, guidelines, and other governing information for the chapter.

Since 2000, the National Historic Oregon Trail Interpretive Center has honored individuals that have made significant contributions to trail history.

Joseph Lane, a Mexican War hero and resident of Indiana, was appointed governor of Oregon Territory in 1849. He set out for Oregon City, where he was inaugurated on this day in history, March 3, 1849, proclaiming the sprawling region under the administration of the United States. The event was of singular consequence. Territorial status brought not only a governor but also three judges, an attorney, and a marshal--all federal appointees. Oregonians who were male, 21 years or older, and citizens of the United States had the franchise and could elect a territorial legislature. Its laws, however, were subject to veto by Congress and the legislature had limited power to incur debt. The residents could elect a delegate to speak for their interests before Congress. Samuel R. Thurston, the first named, lacked the power to vote, but he could advocate territorial interests.Read more at the link here. https://sos.oregon.gov/blue-book/Pages/facts/history/pre-territorial.aspx ... See MoreSee Less
View on Facebook
· Share

We shared a post last month about Jim Beckwourth, with links to a biography and to his dictated autobiography. Here is more information about this legendary man."This man... can make himself understood in almost any language."So reported Dame Shirley when she met Jim Beckwourth during the early years of the California Gold Rush.Born enslaved in Virginia in 1798 (or 1800), Beckwourth grew up in Missouri and was apprenticed to a blacksmith. Emancipated in his twenties, the young man threw himself into one of the fastest-growing industries in mid-1820s Missouri - the fur trade. Over the next four decades, he was as a trapper, a courier, a wagon master, a scout, a rancher, hotelier, and more. He crisscrossed the Plains, working at Bent's Old Fort National Historic Site on the Arkansas and marrying into the Crow, and traveled to Florida and California. During it all, he picked up languages of the West - certainly French, Cheyenne, Lakota, and Crow and perhaps Spanish and many others.When he finally dictated a memoir to Thomas Bonner in the 1850s, the latter's monolingual misspellings of French names reveal Beckwourth's fluency as "St. Vrain" became "Saverine" and "Gervais" was recorded as "Jarvey." While amusing errors, they demonstrate that, phonetically, he was not far from the mark.At the end of his life, following the Sand Creek Massacre National Historic Site and his testimony on it, he returned to the Bighorns and life among the Crow. His ease with languages made him a valuable scout for the US Army posts of Fort Laramie and Fort Phil Kearny in 1865 and 1866. In the fall of 1866, he died; probably of a heart attack.After his passing, the Rocky Mountain News effused that "[in] wild western life and adventure, he was the compeer of the Chouteaus, the Bents, the Sarpys, the Vasquezs, the Meeks, Bridger, Jack Hays, Kit Carson, Bill Williams, and a host of others who have become famous in their way and among whom none excelled him in wild and daring adventure, or peculiar characteristics in mode of life."Photo: Wikimedia Commons#BlackHistoryMonth #MountainMan #Language #Communication ... See MoreSee Less

The six videos that were created for Black History Month, in case you missed them. Please be sure to subscribe to our channel. Hiram and Matilda Young, ex-slaves in Independence who became wealthy wagon makers https://youtu.be/wglOkRw3BfgBiddy Mason, ex-slave of Mormon pioneers who gained freedom in Los Angeles and became a very wealthy nurse and midwife https://youtu.be/jhuVEblAI8cTrinity and Sadie Palmer, Jackson County master and slave https://youtu.be/0Cddu3Hey7IEmily Fisher, ex-slave who owned the hotel where Ophelia's now stands on the Square https://youtu.be/C5Z1fK3XA0YSam Shepherd, slave who hewed the logs for the original Jackson County Courthouse https://youtu.be/HreSwPbS6wM Harriett Ann Dawes, slave and granddaughter of William Waddell, trail freighter and Pony Express co-founder https://youtu.be/9-gIuZE3Y2s ... See MoreSee Less

It is time to celebrate women's history on the overland trails. Read excerpts from women's diaries, journals and letters in OCTA's Merrill Mattes Collection.https://www.octa-journals.org/category/merrill-mattes-collectionYou can also purchase diaries and journals written by women on the trails from the OCTA Store.https://octa-trails.org/product-category/women-and-the-trail/March is #WomensHistoryMonth. This year Scotts Bluff National Monument celebrates the accomplishments of the many female emigrants who traveled west past Scotts Bluff on the Great Platte River Road. Like their male counterparts, women on the trail faced many hardships including blazing heat, frigid cold, dangerous water crossings and disease. However, unlike their husbands, many women did not have a choice in picking up stakes and moving west. Here are the words written by Martha G. Masterson about her mother, “She begged Father to give up the notion but he could not. ... Mother finally reluctantly consented to go. ... Lovers, sweethearts, and associates were all left behind. ... The saddest parting of all was when my mother took leave of her aged and sorrowing mother, knowing full well that they would never meet again on earth.” #TrailTuesdayImage- A man and woman, each dressed in pioneer clothing, stand in front of a sandstone bluff. NPS ... See MoreSee Less

Today in history, March 2, 1853, President Millard Fillmore signed legislation creating the Washington Territory. This action gave final definition to Oregon's geography. This full story is, however, much more complex. Read it all at the link here. ... See MoreSee Less

On this day in 1861, the 2 1/2-year history of the Butterfield Overland Mail in Texas came to an end. The Butterfield line began operations on September 15, 1858. It carried passengers and mail between St. Louis, Memphis, and San Francisco, a distance of 2,795 miles. A government contract called for the company to carry letter mail twice weekly in both directions in four-horse coaches, or spring wagons suitable for carrying passengers. Each trip was to be completed in twenty-five days. The postage rate was ten cents per half ounce. Passenger fare was $200 each way. Stage service in Texas was terminated in March 1861, when an agreement was made to modify the contract and move the route northward out of the state. ... See MoreSee Less

The Butterfield (or Southern) Overland Mail, which operated from September 15, 1858, until March 1, 1861, was a semiweekly mail and passenger stage service from St. Louis, Missouri, and Memphis, Tenne...
View on Facebook
· Share

Today we close out Black History Month with our sixth video featuring the contributions of black Americans to our National Historic Trails. OCTA's newest video is of Sam Shepherd, a slave born in 1800 whose master trained him to be a master craftsman, who then hired Sam out as a wood-worker. In 1827, Sam hewed the logs for the first courthouse in Jackson County, Missouri. The log structure still stands today as a museum in Independence. The courthouse was the scene of many legal decisions related to Mormon pioneers and Santa Fe Trail traders, and later served as a trade goods store for those setting out to Oregon or California. Harry Truman had a temporary office here while the modern courthouse was being remodeled in the 1930s, and his wife Bess held her lady's club meetings there. Sam's family, who largely live in Texas in the 21st century, recently started holding their family reunions in the courthouse that Sam helped create. We hope you've enjoyed our series featuring the Black American experience on our National Historic Trails. Please subscribe to our channel to get alerts as soon as we launch our next series of videos, which will feature multiple vignettes on the Southern Route between Nogales and Yuma in Arizona, the Missouri outfitting towns of Lexington and St. Joseph, and the famed Lone Elm Campground in Kansas, among others. #BlackHistoryMonth﻿﻿ #BlackHistoryMonth2021 #OCTA #OregonTrail #CaliforniaTrail #MormonPioneerTrail #SantaFeTrail #IndependenceSquare #VisitIndependence #IndepMo ... See MoreSee Less

OCTA's board of directors is holding its bi-annual board meeting today via Zoom. We hope to meet in person next September at the Elko, Nevada Convention. ... See MoreSee Less

Because it is Black History Month, OCTA has created a number of short videos highlighting African-Americans on our National Historic Trails. Our newest video is of Biddy Mason, a slave from Mississippi whose master converted to Mormonism and moved to Nauvoo, Illinois. Biddy went to Salt Lake City via the Mormon Pioneer Trail, then on to San Bernardino in 1851. After gaining her freedom, she went on to become one of the wealthiest residents of Los Angeles. We're debuting this video in our bi-annual board meeting this morning. Watch to learn more about Biddy!#BlackHistoryMonth﻿﻿ #BlackHistoryMonth2021 #OCTA #OregonTrail #CaliforniaTrail #MormonPioneerTrail #MormonBattalion ... See MoreSee Less